The River Avon, also known as the Bristol Avon or Lower Avon, rises on the southeastern slope of the Cotswolds, and flows through Gloucestershire, Wiltshire, and Somerset. The originating source is debatable – some consider the prime source to be a spring which rises in Badmington Park just north of Acton Turville, other considered sources are the Tetbury Avon which rises at Wor Well to the north east of Tetbury, and Joyce’s Pool, where the Sherston branch of the Avon begins. These three tributaries join in Malmesbury before flowing south to Great Somerford and on to Chippenham. Continuing a southerly flow it passes through Melksham before turning west to flow through Bradford on avon. After Bradford on Avon the river turns north to pass through Bath and then north easterly to reach Bristol before flowing beneath the Clifton Suspension bridge and the Avon Gorge and on to the Bristol Channel. The approximate length of the river from source to mouth is 120 kilometres or 75 miles. 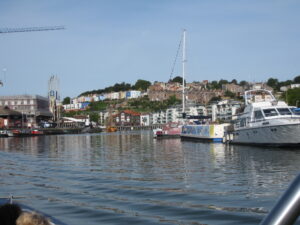 On its journey to the sea it is joined by several major tributaries including the Rivers Bliss, Chew, Frome, Marden, Tetbury Avon and Trym. The river also merges with the River Kennet at Bath to form part of the seventy nine mile long, Kennet and Avon Canal. 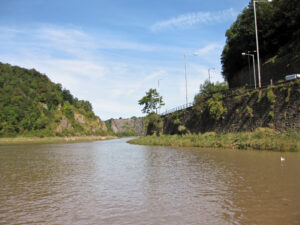