Constructed in 1951 as a pilot scheme to test the feasability of passing water from the Parrett to the Kings Sedgemoor Drain. This followed the lines of a similar relief channel recommended in 1853. After the floods of 1960 a new scheme was proposed but rejected as being too costly. However a revised scheme, the existing Sowy River, was approved in 1963. Construction of the Sowy river commenced in the mid 1960’s with completion in 1972 and was designed to relieve the flooding of the River Parrett at Langport and Aller Moor..1 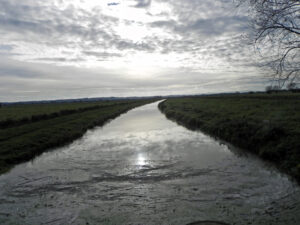 References: 1. The Draining of the Somerset Levels –  Michael Williams