Joins the River Parrett at Langport.

From the Parrett south of the town a ditch, known as the Portlake rhine by 1526 and later as the Catchwater, ran through the town and north-west over the Langport ‘moors’ to rejoin the river. The portion through the ‘moors’ was filled in 1966  and south of the Little Bow bridge it has been covered by a car park. The Back river, known as a common rhine in 1470–1,  runs west from the Catchwater south of the town and enters the Parrett above the Great Bow bridge. ( From Victoria County History https://www.british-history.ac.uk/vch/som/vol3/pp16-38 ) 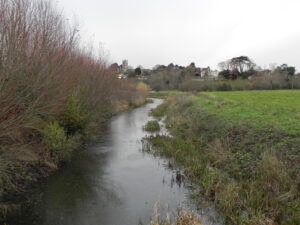