The River Brue rises in Kingswood Warren in the parish of Brewham on the westernmost edge of the high land of Cranborne Chase and the West Wiltshire Downs and flows generally in a south westerly direction through the hamlet of Border and on to South Brewham, where it passes beneath Church Bridge, a stone arch bridge ( a bridge was recorded at this location in the 13th century). From South Brewham it continues through the grounds of Colinshays Manor and passes through the Bruton flood control system before it reaches the town of Bruton. From source to Bruton the river flows for an approximate distance of 3.5 miles and is joined on its journey by several tributary streams that drain the hills either side of the river.

The river then flows through the ancient town of Bruton passing beneath several historic bridges and is joined on the western end of the town close to Leggs Bridge by Combe Brook which rises in the hills north of Bruton close to Copplesbury Farm and a smaller unnamed stream from the south. It then flows on past Gants Mill to Cole where it is joined by the River Pitt. From Cole the river takes a more westerly direction to Wyke Champflower with it’s three arch medieval bridge and then resumes the south westerly flow through Ansford, past Clanville Manor to Alford where it is joined by the River Alham. 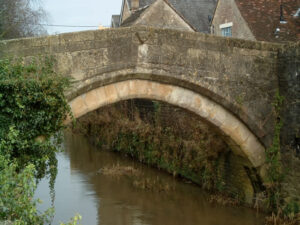 Passing Alford House the river passes the site of Hornblotton Mill, where now just the the mill leat remains and on to Lovington Mill where the river turns south for a short distance before resuming a westerly direction passing beneath Bridgefoot Bridge which carries the Fosseway and on to West Lydford.

At West Lydford the river passes beneath a delightful 17th century stone bridge of five arches and just past St Peter’s Church turns north cascading over a large weir. At this point a mill leat is formed which provided a power source for a mill close to Tootle Bridge where the mill leat rejoins the Brue. Resuming its westerly direction the river continues on to the medieval Tootle Bridge.

From Cow bridge the river flows in a westerly direction along a straight channel to Clyce Hole or Prior’s Weir. This straight channel was constructed circa 12 th century to provide the flow for the Glastonbury Mill Stream that starts at Clyce Hole. At Clyce Hole the river drops 3 metres and continues to flow in a westerly direction to Pomparles Bridge which carries the A39. From Pomparles Bridge the river changes direction to a generally northern flow and after approximately 0.25 miles the channels have been engineered to change the course of the original river flow. The new channels were probably constructed circa 12th century. The river passes beneath Cradle Bridge which carries Porchestall Drove and then beneath a disused railway bridge which originally carried the Somerset & Dorset Joint Railway, Highbridge to Glastonbury line. This is also the location where the disused Glastonbury Canal crossed the river. It continues to flow northerly to Cold Harbour Bridge where it joins with the mouth of the Glastonbury Mill Stream.

The river changes to a north easterly direction at Cold Harbour Bridge and flows in a straight channel to Stileway Bridge, first crossing beneath the accommodation bridges, Tyne Farm Bridge, White Bridge, and Rice Farm Bridge. The river then passes beneath Porters Hatch Bridge, where nearby is the 14th century Abbot’s Fish House, now a listed building and scheduled ancient monument. From Porters Hatch Bridge the river passes the medieval Meare Manor and chapel where it flows beneath an18th century single arch stone bridge. Approximately 1 mile downstream from Meare Bridge the river is joined by Decoy Rhine and Whites River. Whites River is short and holds the flows of the River Sheppey which feeds in via James Wear River, and Hartlake River which is formed by the streams of Redlake and Whitelake. The river then continues to Westhay Bridge. 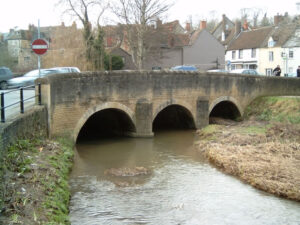 From Westhay Bridge the river flows north easterly for close to 3 miles, in a almost straight channel, past Westhay Levels to the south and Tadham Moor to the north to reach the North Drain join and pumping station. The river turns west and flows beneath a lattice girder bridge at River House Farm, and then a natural stone single arch bridge which carries the Burtle Road. Continuing through Liberty Moor it reaches Cripps Bridge and the join with the Cripps River. The last part of that journey is a 0.7 mile section of a straight channel cut to remove a meander in the river as part of the 1801 Brue Drainage Act. It flows on to Basin Bridge.

From Basin bridge the river flows westerly to Hackness Sluice which also carries Newbridge Drove. Flowing beneath the M5 Motorway Bridge near Brent farm it turns north for a short distance to pass beneath the Highbridge Rail Bridge where it turns west to Brue Bridge at Highbridge. It continues in a westerly direction to the New Clyce Bridge which controls the tidal river flow. Meandering on through the Brue Estuary to reach the sea at Burnham on Sea.

The Brue was navigable from the harbour at Highbridge up to the south of Glastonbury and the current tidal limit is up to the sluices at New Clyce Bridge in Highbridge.