The river Cale rises in Coneygore Wood to the north east of Charlton Musgrove. It flows in a southerly direction to the south of Charlton Musgrove, where it is joined by a stream that rises in Newpark Wood, to Bayford where it is joined by tributary streams, one that originates in just east of Stoney Stoke and the other near to Bourton. The river continues on through Wincanton, past Rodgrove and Abbey Ford, and then past the western side of Kingston Magna, Five Bridges near Lower Nyland, through Gibbs Marsh and joins the river Stour west of Marnhull.

On it’s journey to the Stour, south of Wincanton it is joined by a number of unnamed tributary streams, one that rises north of Stoke Trister and another the rises on Maltkiln Hill. Further south it is joined on it’s western side by Bow Brook that rises near South Cheriton, and on it’s eastern side by Filley Brook which originates south of Cucklington, and below South Nyland, Bow Brook which originates at Templecombe joins the Cale on it’s western side. 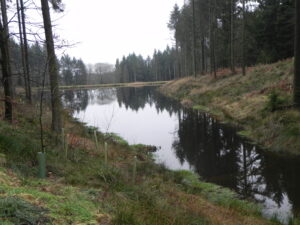