The Cam rises on the south side of Bratton Hill and flows south west through Yarlington, North Cadbury, Sparkford, Queen Camel, and joins with the river Yeo near Yeovilton.

On its journey to the Yeo it is joined by several unnamed streams the first which also originates on the south side of Bratten Hill, just south of the Cam source and flows through Lower Woolston and to the south of North Cadbury and joins with Cam at Sparkford. This tributary stream also has a tributary with streams originating near Maperton and blackford. South of Sparkford a stream joins the Cam from South Cadbury. 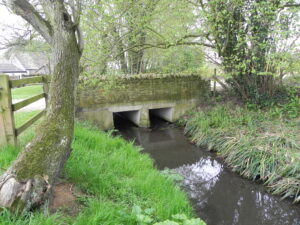