The headwaters of the River Yeo, also known as the River Ivel, are found in the village of Poyington in North Dorset. The river then flows south through Oborne to Sherborne where it is joined by the waters of the Gascoigne River close to Sherborne Lake. The Gascoigne River is formed by springs at Bradley Head and Milbourne Wick,in Somerset. The river continues in a south westerly direction through Sherborne to Bradford Abbas where it is joined by the waters of the River Wriggle which forms in the hills behind Hermitage, Hilfield and Batcombe in Dorset. At this point the river has travelled approximately 7.25 miles from its source. To the west of Bradford Abbas, close to Yeovil Junction Station, the river flows into Somerset and turns to a northerly flow. Just north of Yeovil Junction waters join from North Coker to the west and from south of Sutton Bingham. 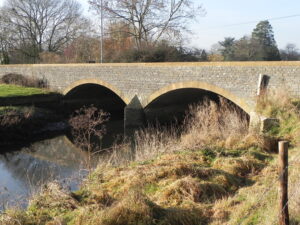 South of Wyndham Hill, where Dodham Brook joins, the river turns to an easterly direction to flow beneath Yeovil Bridge and then to the south of Penn Mill before turning north again. To the west of Nether Compton the river is joined by the Trent Brook before reaching Mudford where the rivers journey is now  aprroximately 14 miles. Flowing on to the west of Chilton Cantello the river turns west passing to the south of Yeovilton where the River Cam and Hornsey Brook join and then to the north of Ilchester. Flowing through King’s Moor the river is joined by the Bearley Brook before flowing beneath Load Bridge and then through Hay Moor to Pibsbury before joining the river Parrett to the south of Langport. Distance from source to the confluence with the Parrett is approximately 28.5 miles.