The Barle rises on the Chains – the north west plateau of Exmoor – at a height of 1450 feet above sea level. Around 1830 the Knight family created, for unknown reasons, a reservoir from the headwaters of the Barle – Pinkery or Pinkworthy  pond.

From the reservoir the Barle flows south to Goat Hill bridge before taking a more easterly direction and flows through a beautiful moorland valley, where it takes waters from Great Vintcombe, Little Vintcombe and Smallacombe. It flows beneath Ricksy Ball to Cornham Ford and on past Drybridge Combe and through Cornham Brake where the waters of Bale Water join. After a distance of approximately 8.5 kilometres it reaches Simonsbath. The fall between source and Simonsbath is approximately 415 feet. At Simonsbath the waters of the Barle provide the power for a historic saw mill. 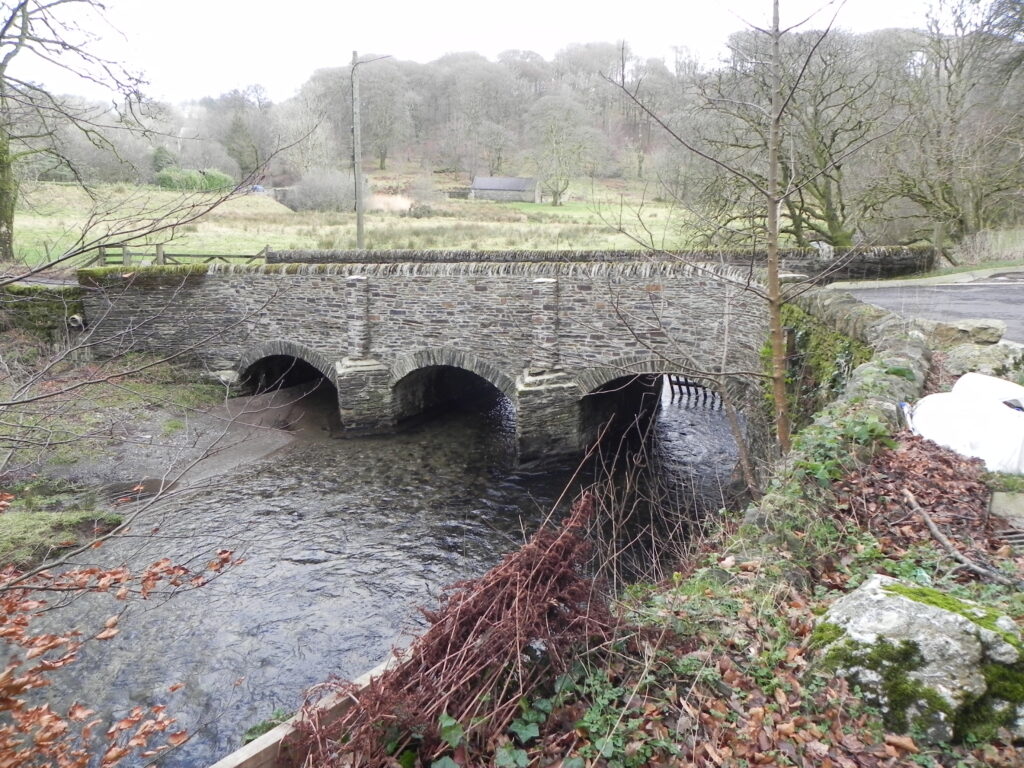 Flowing beneath the medieval Simonsbath bridge, a Grade II listed structure, the river is joined by Ashcombe Water and waters from Halscombe and Little Halscombe. It passes Flexbarrow to reach the site of Wheal Eliza, the ruins of a copper mine which closed in 1854. A little after, the waters of Great Woolcombe join the Barle and it continues on past Cow Castle, an iron age hill fort, where the waters of White Water join. At Sherdon Hutch the river is joined by Sherdon Water and then arrives at Landacre. A journey from source of approximately 15 kilometres and a fall of 590 feet. 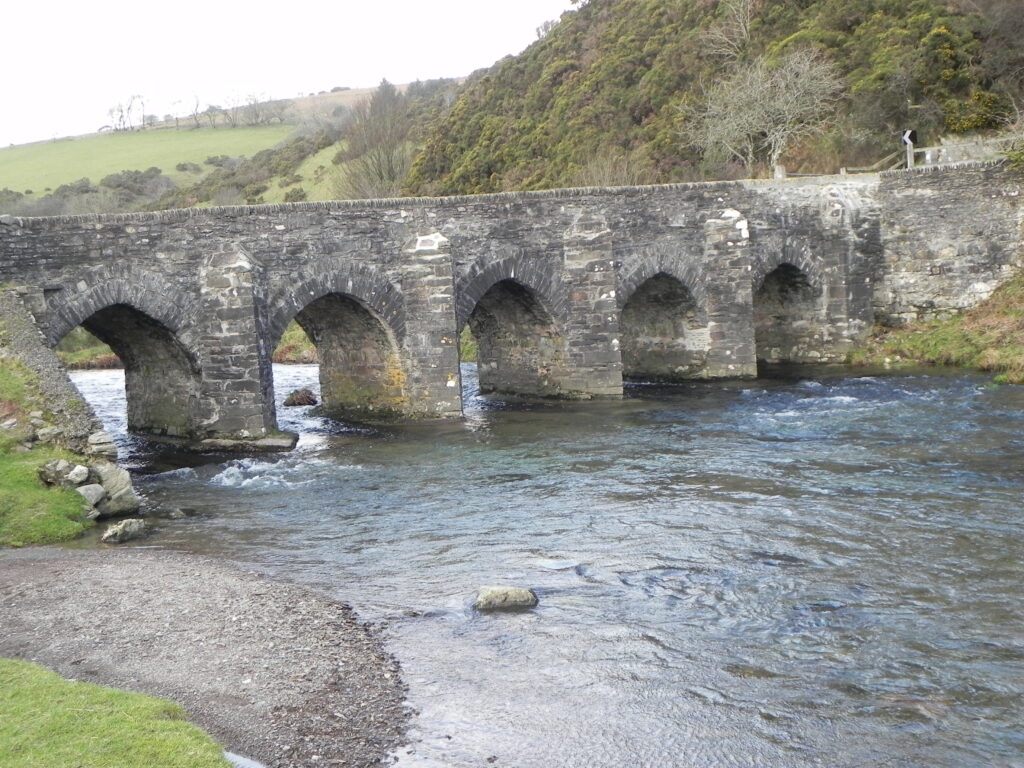 At Landacre the waters pass beneath Landacre Bridge, a five arched medieval bridge which is classified as a Scheduled Monument by Historic England. The river flows on past Newland wood before being joined by the waters of Portford Water and then on to Withypool. At Withypool the river flows beneath New Bridge, a 19th century six-arched stone road bridge. 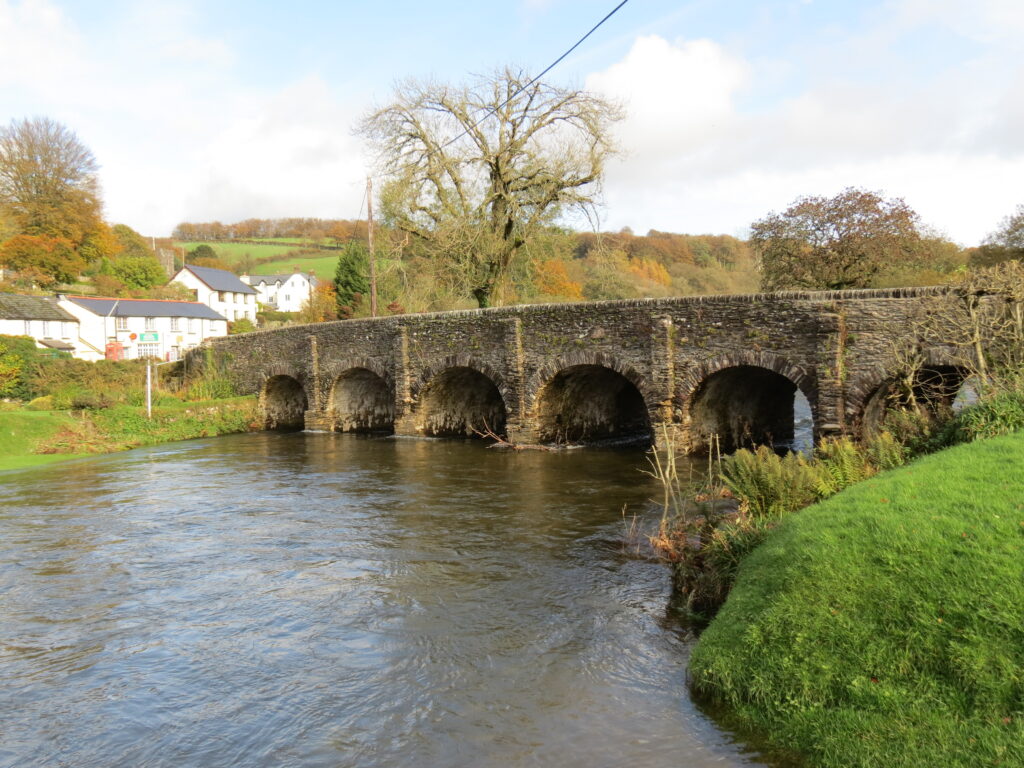 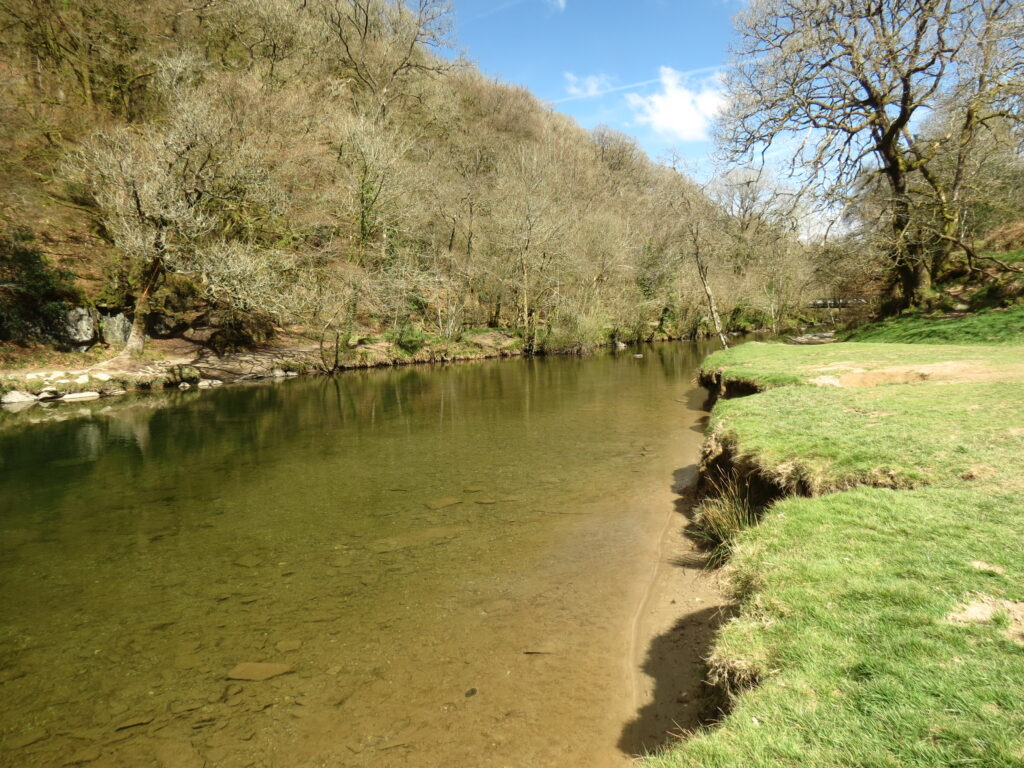 Onwards from Withypool, the river is almost immediately joined by the waters of Pennycombe Water. There are are several fords on this section including stepping stones. Before reaching Tarr Steps it passes through steep sided wooded valleys of special scientific interest . Tarr Steps woods consisting of Liscombe Wood, Knaplock Wood and North Barton Wood are designated as a National Nature Reserve (NNR). At Tarr Steps there is a multi-span, 55 metre medieval clapper bridge – a Scheduled Monument. At Tarr Steps the waters of the Little River join. The journey now from source is approximately 25 kilometres with a fall of almost 750 feet. 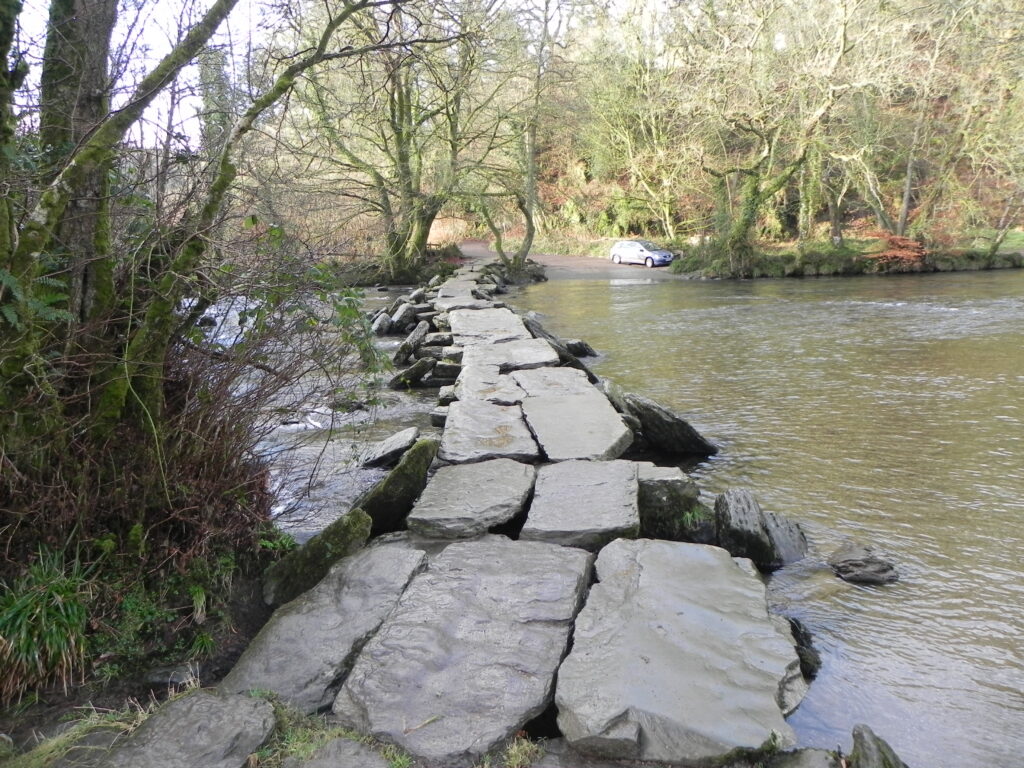 From Tarr Steps the river continues to flow through a wooded valley which include South Barton and Ashway Hat woods, Great Birchcleave and Horse woods. It then flows between the historic iron age hill forts of Brewers Castle and Mounsey Castle, both are Scheduled Monuments. The river is then joined by its largest tributary – the Danes Brook. It meanders on past Draydon Wood and Shircombe Slade, Inventiory Wood and Marsh Wood to reach Marsh Bridge. At Marsh Bridge waters from Highercombe join. 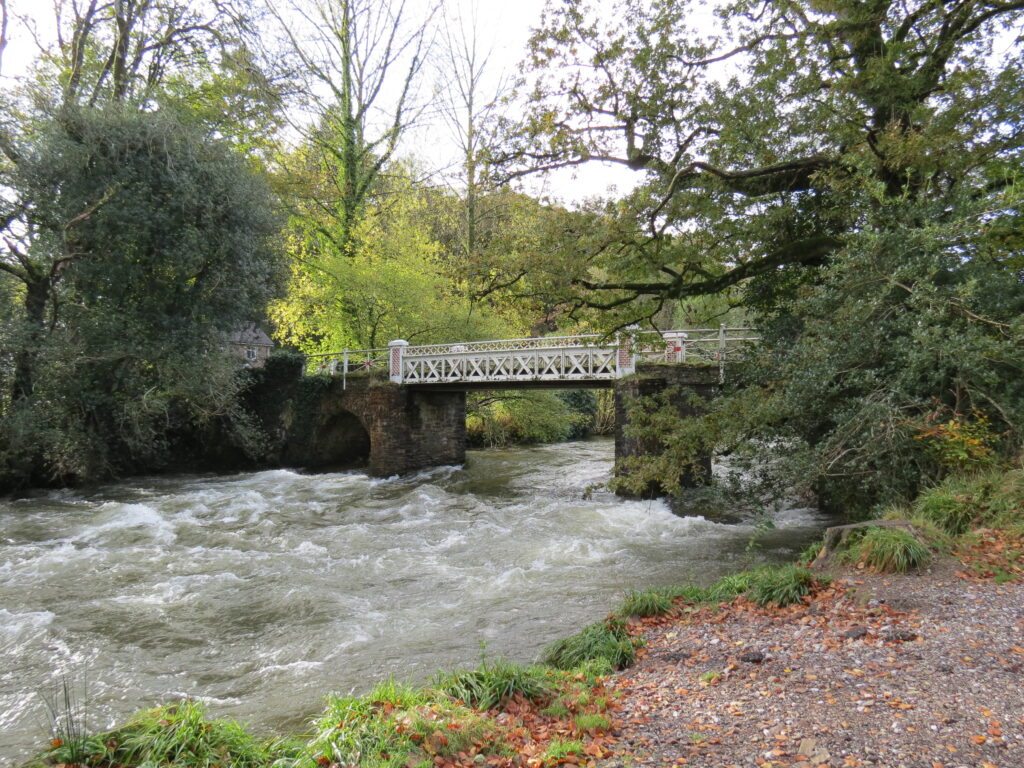 From Marsh bridge the river reaches the recently renovated Upper Town Mill weir and then the medieval Barle Bridge in Dulverton. Barle Bridge has five arches and is a Grade II Scheduled Monument.. The rivers journey from source to Dulverton is now approximately 36 kilometre with fall of around 970 feet. 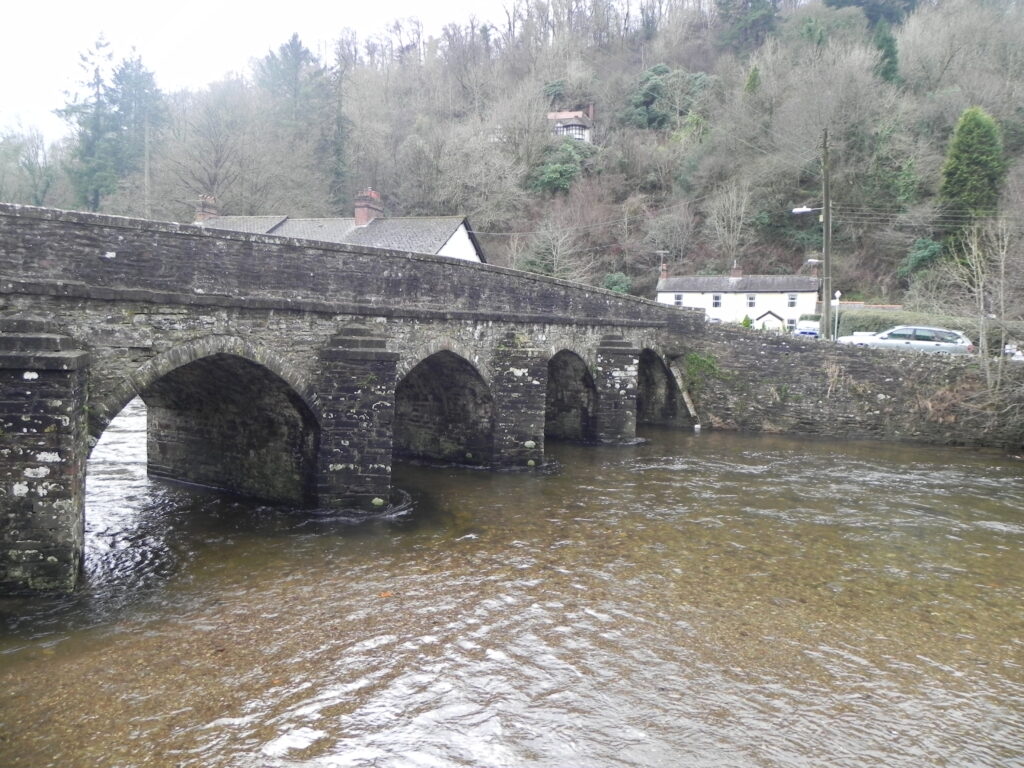 From Dulverton the river passes through Beasley Weir. Beasley Weir was built in 1909 and was known as Beasley Power Station, a hydro-electric generating plant and provided the first electricity to Dulverton. There is a large Salmon ladder and from 1950 until 1980 the site was used as a fish breeding station. In 2016 t a new hydropower system was built which generates enough electricity to power 100 homes.

Continuing on the river flows below New Bridge, a Grade ii listed structure built in 1870 to provide access to Pixton Park, and then beneath Perry New Road, and finally Perrys Weir before reaching its confluence with the Little Exe to form the River Exe which then flows on for approximately 40 miles to reach the Exe Estuary and the English Channel at Exmouth. The river Barle’s journey from source to its confluence with the Little Exe is approximately 39 kilometres and the river has fallen from its height at source of 1450 feet to 380 feet at its end. 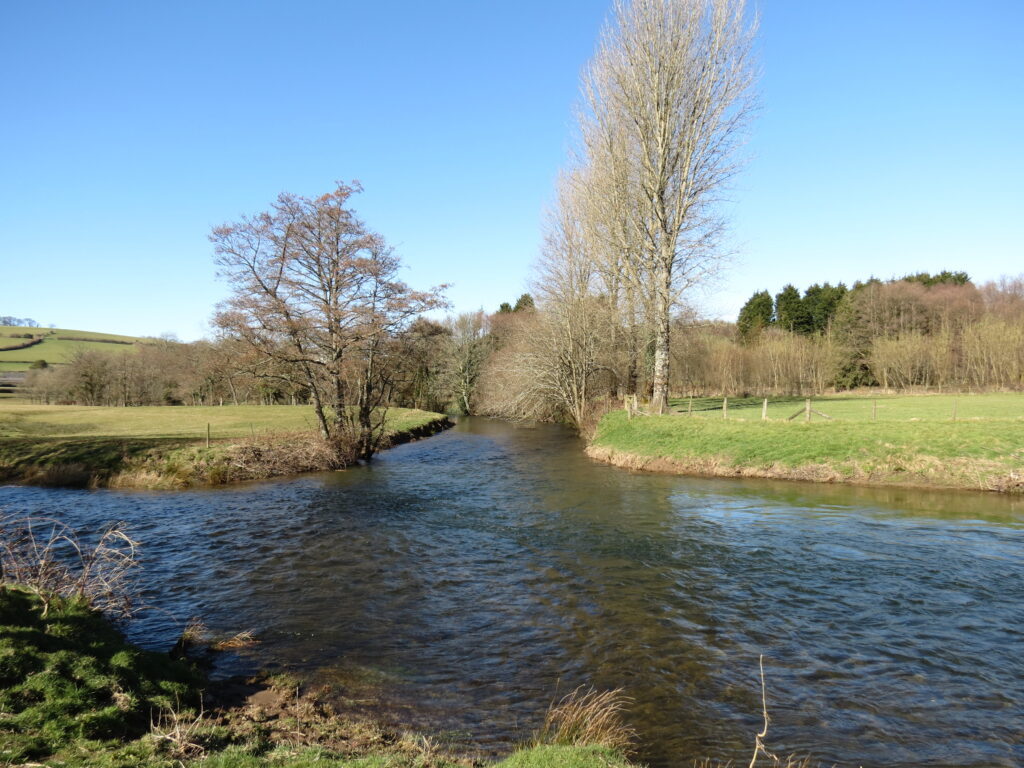 Below you can watch a playlist of videos of the river from source to confluence with the River Exe.