The river starts its journey at Exe Head at an Elevation of 463 metres. It flows in a easterly direction to Exe Head Bridge which carries the B3223, the Lynmouth to Simonsbath Road. Continuing in a easterly direction it flows through the valley between Great Buscombe to the North and Little Ashcombe to the south before flowing beneath Warren Bridge, a single arch stone bridge. Flowing on through Exe Cleave, it receives water from Rams Combe and then reaches Westermill Farm, and flowing beneath Silly Bridge to reach Riscombe where it turns to a south easterly direction, past Edgcott to reach Exford. From source to Exford the river has travelled close to seven miles. 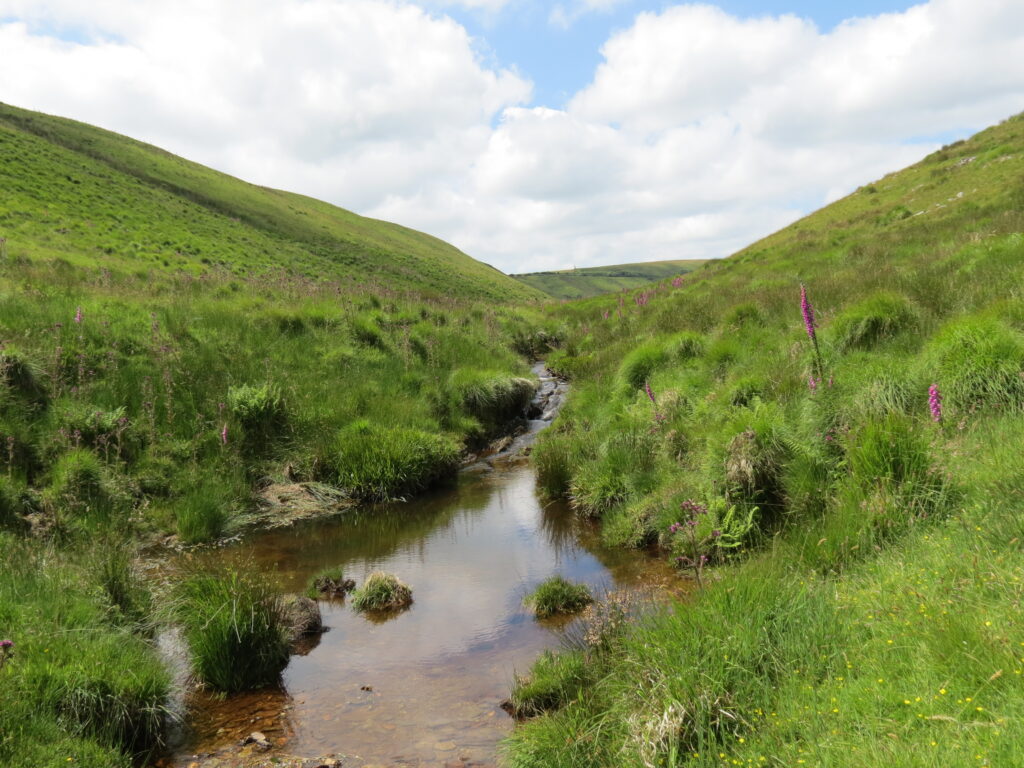 At Exford it flows beneath Exford Bridge, a listed 3 arch structure and flows through Lyncombe and then the valley between Staddon Hill and Room Hill to reach Nethercote where the river turns again to an easterly direction. Continuing to the south of Staddon Hill the river receives the waters of Larcombe Brook and turns to the southy to reach Winsford.From source to Winsford the river has travelled close to thirteen miles. 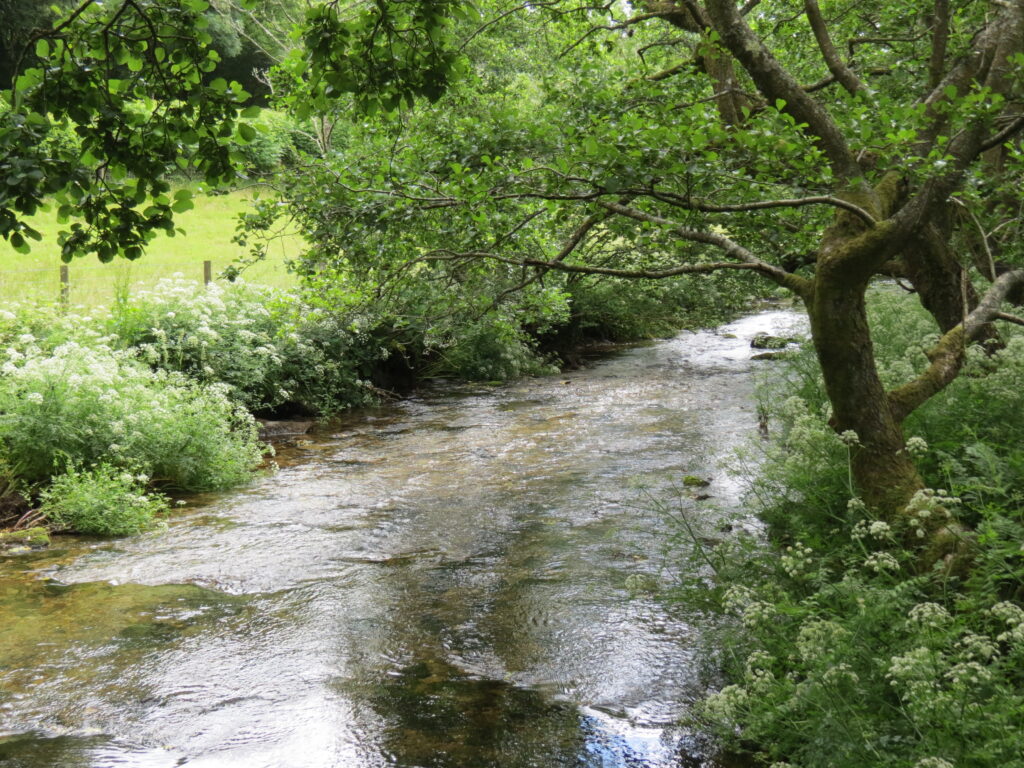 At Winsford it receives the waters from Winn Brook and flows beneath three bridges, the first being the medieval packhorse bridge, the second, Vicarage Bridge and the third, Exe Bridge. To the south of Winsford the river flows beneath Edbrooke Bridge, another packhorse structure and then Week’s Bridge to reach Copplesham where the waters from the River Quarme join. Now flowing in a southerly direction the river flows to the west of Exton to reach Bridgetown, where the river passes beneath Bridgetown Bridge. Bridgetown Cricket Club play matches along side the river. 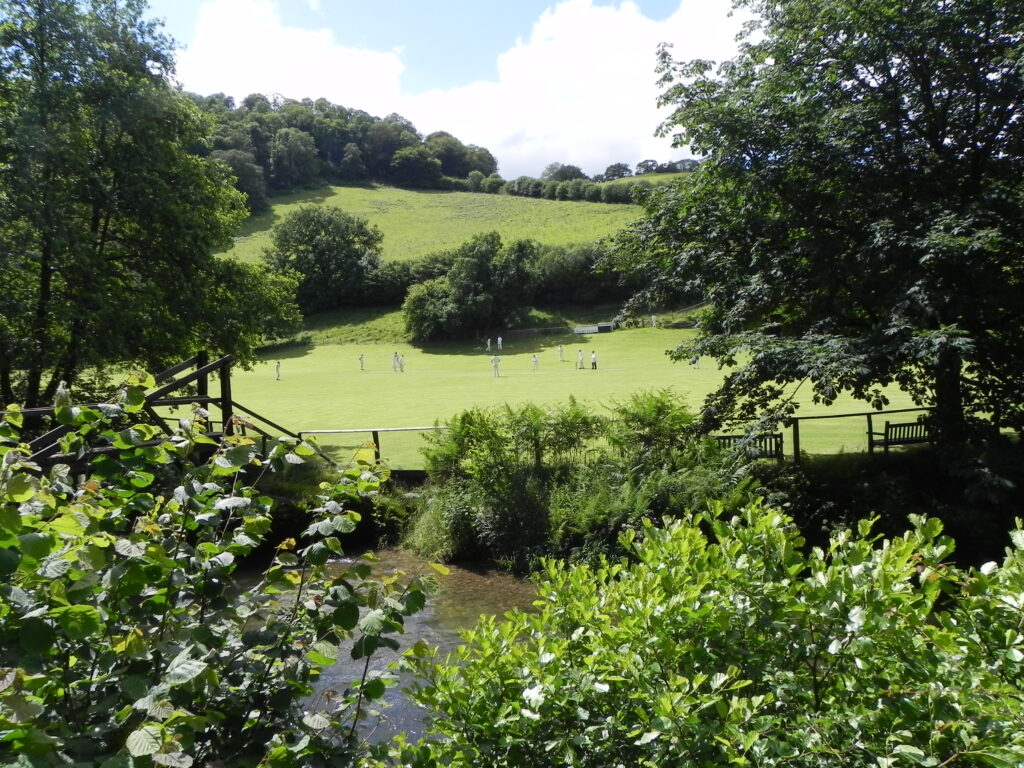 From Bridgetown the river continues flowing to the south to flow beneath Milton’s Bridge. The river flows between Broford and Howe Woods where waters from Combehead join and on past Winslade Wood to Kent’s Weir and then Chilly Bridge. Continuing to flow through wooded valleys the river passes Barlynch Wood to reach Hele Bridge, approximately 20 miles from the rivers source. Just under a mile from Helebridge the river is joined by the waters of the River Haddeo and then after a further mile by the waters of the River Barle before reaching Exebridge. The Rivers journey from source to Exebridge is approximately 23 miles. 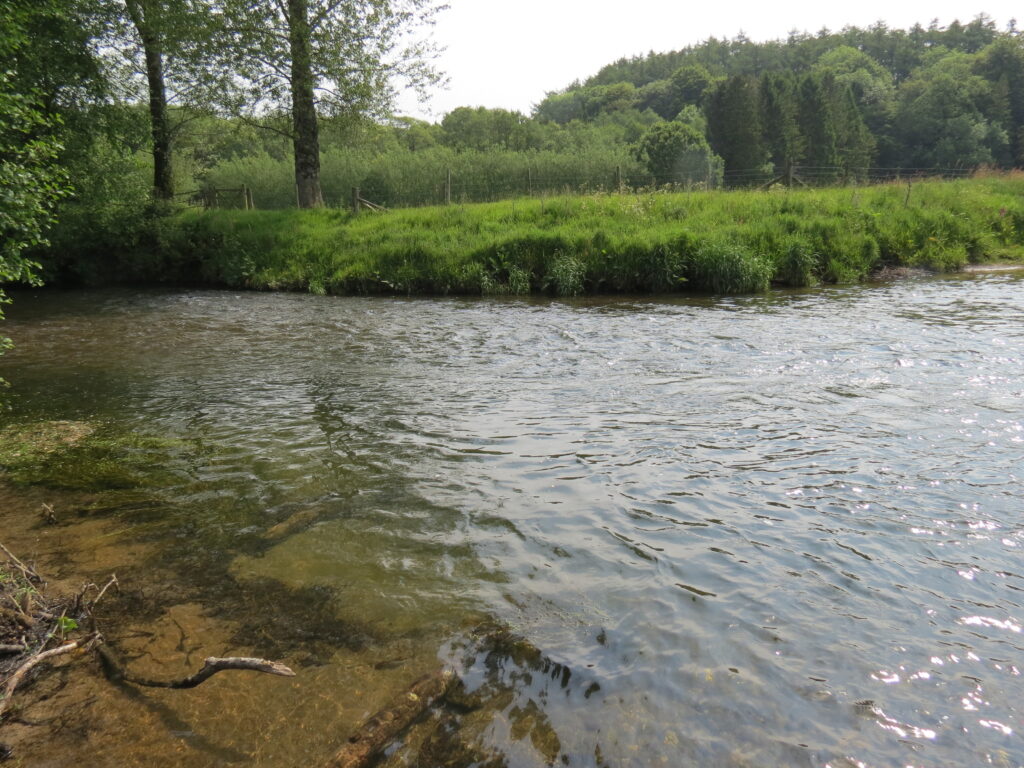 Below you can watch a playlist of videos of the Little Exe from source to its confluence with the River Barle at Two Waters,

From its confluence with the River Barle at Two Waters the river flows past the weir and pumping station built to extract and pump the waters of the river Exe to Wimbleball Reservoir. Flowing on the river passes the impressive abutments of the Exe Valley Railway bridge which was closed and dismantled in 1964. Reaching Exebridge the river flows beneath the 18th century 3 arched Exe Bridge, a Grade II listed structure. 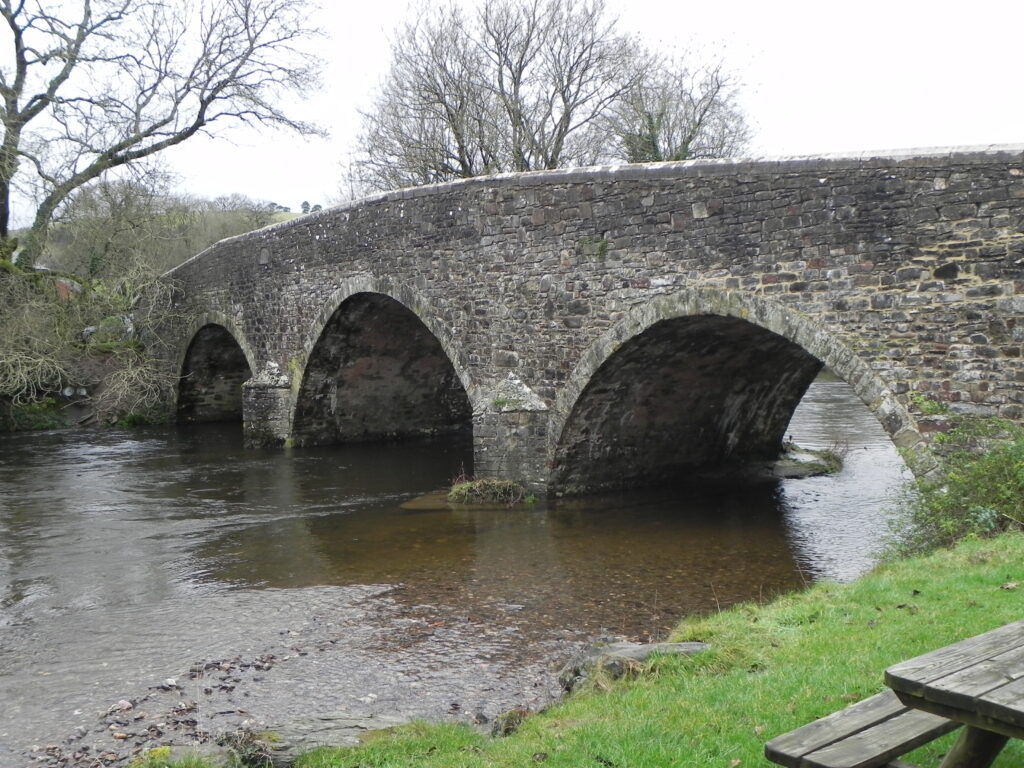 A short distance after leaving Exebridge the river is joined by the waters of the River Brockey. It continues past Wonham Woods to reach Highleigh Mill and Highleigh bridge and then Oakfordbridge Weir, which once provided the power for a corn mill, and then flows beneath Oakford Bridge – a Grade II Listed Structure. 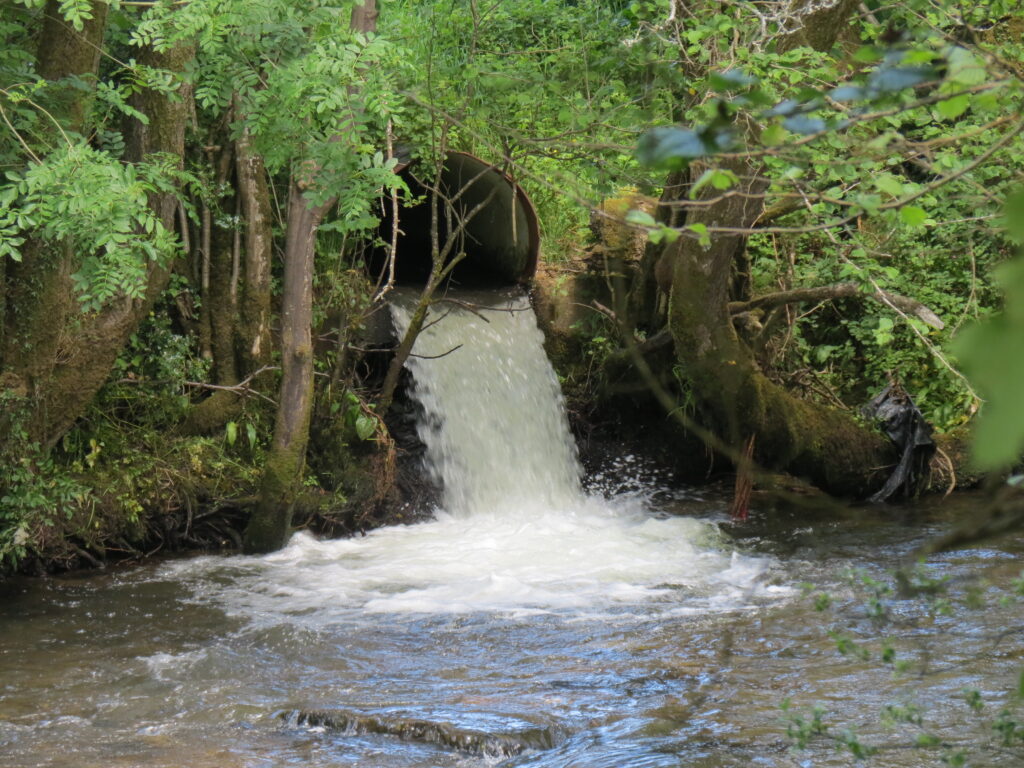 The river then flows to Stuckeridge Bridge, a Grade II listed structure, built in the 19th century it carries the B3227 across the river. Skirting the Stuckeridge Estate it passes beneath the Grade II listed Chain Bridge, a private suspension bridge providing access to Stuckeridge House. At Stuckeridge bridge, the waters of Iron Mill Stream join the river. Continuing on past Holmingham Woods and beneath Halfpenny Bridge the river is joined by the River Batherm before it reaches Cove Bridge, an 18th century hump backed road bridge and Grade II Listed Structure. 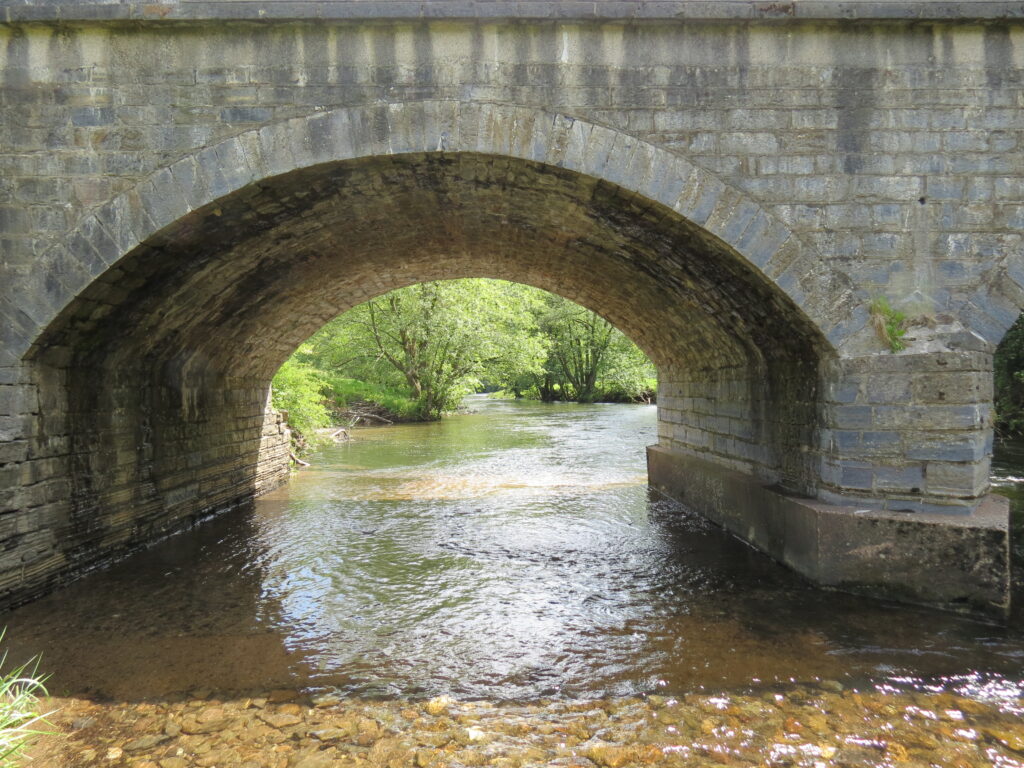 Next comes Bickleigh Woods and Iron Bridge, another Grade II Listed Structure, and then two substantial weirs, the first at Washfield which provided water to power Washfield Mill and the second at Bolham for Bolham Mill. The Bolham weir was also utilised in the late 19th century to drive turbines which provided electricity to Knighthayes Court. A little further downstream is Head weir from which a leat ran to the Heathcoat’s Lace Factory in Tiverton, where a large waterwheel provided the power to drive the lace making machinery. 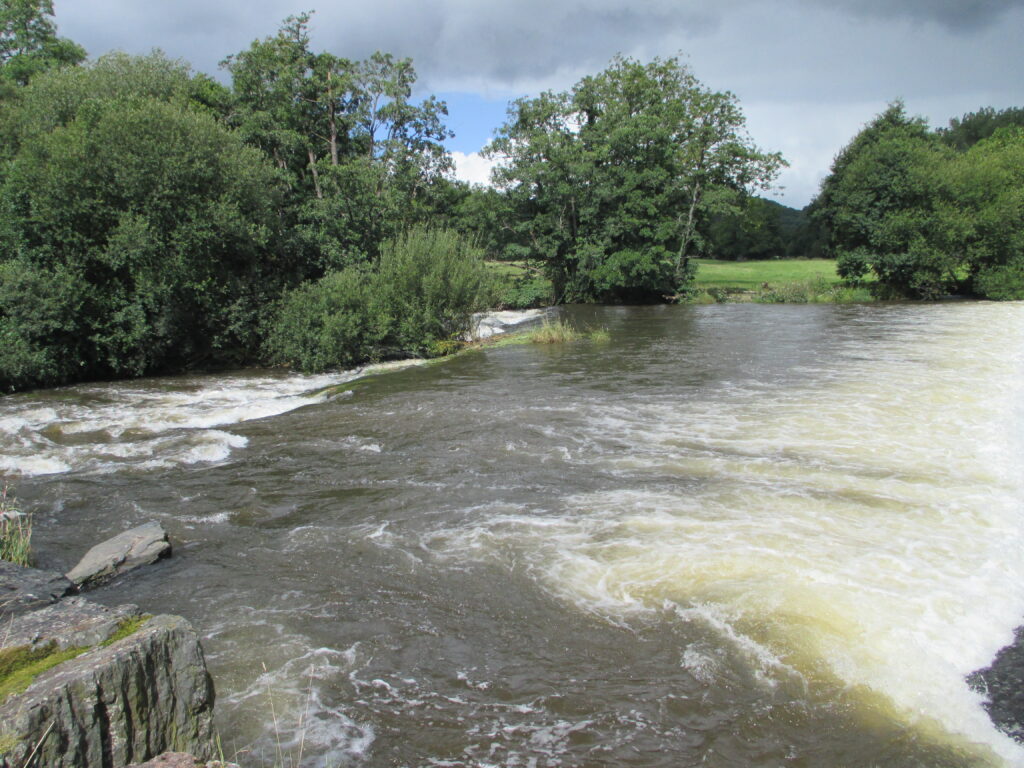 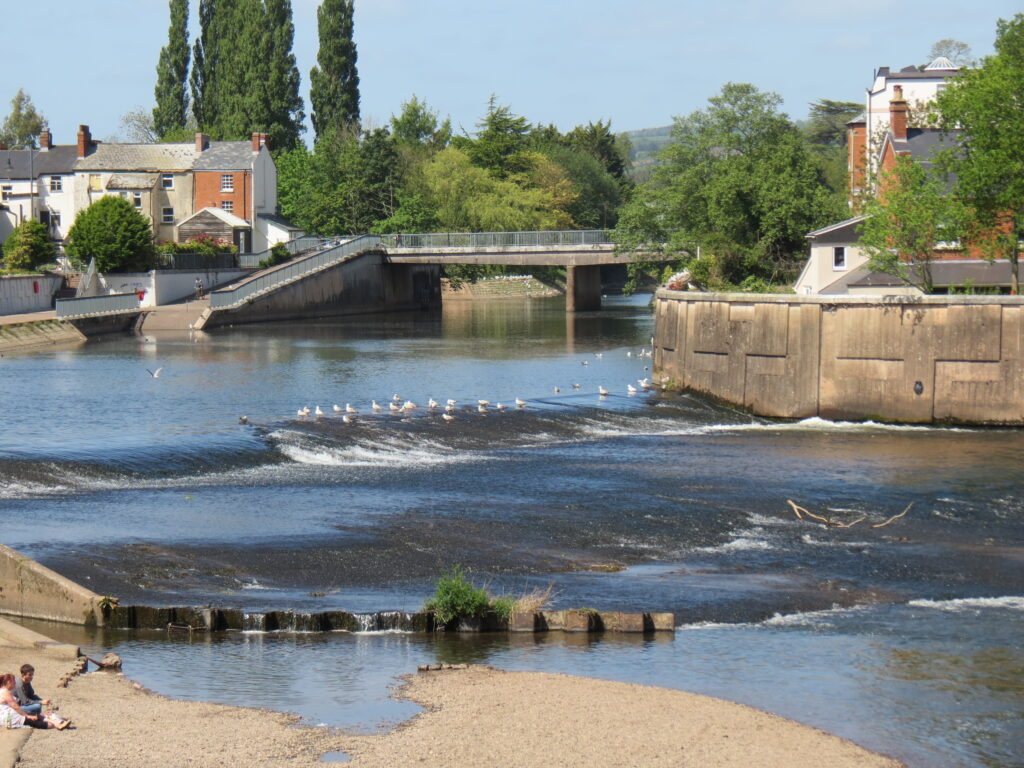 At this point the rivers journey from Two Waters in Exebridge is approximately 12.6 miles, a total distance from source of 35.6 miles  and has fallen to 200 feet above sea level from an elevation at source of approximately 1500 feet.

South from Tiverton the river is soon joined by the waters of the River Lowman and flows past Pitts Wood, Backs Wood and Great Henbeer Wood to reach Bickliegh Weir and leat which provided the power for Bickliegh Mill. The river flows beneath a disused rail bridge that once carried the Exe Valley Railway across the river before reaching Bickliegh Bridge, a fine road bridge with five arches, built in 1610, it is a Grade II Listed Structure. Immediately below the bridge is a picturesque weir. The river is then joined by the waters of the River Dart which rises on Stoodleigh Beacon before flowing past Bickleigh Castle. 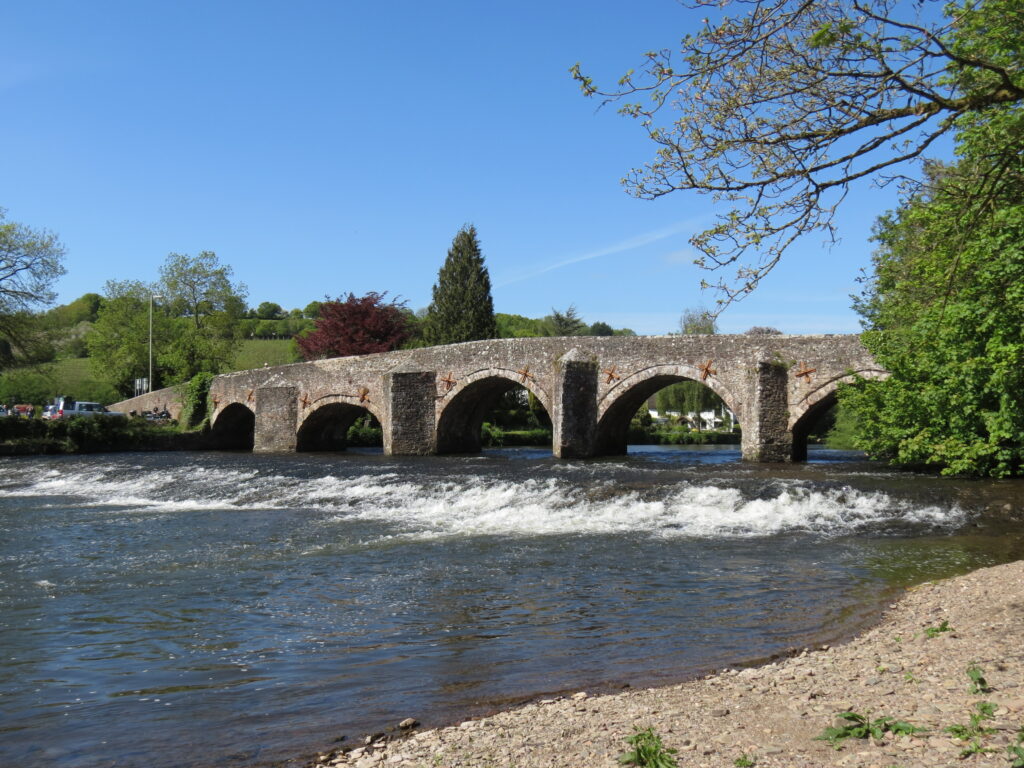 From Bickleigh the floodplain opens out and rolling farmland replaces woodland. The river flows past Chitterly and Up Exe where a weir once fed the leat for Upexe Mill. Thorverton weir a short distance downstream once fed the leat for Thorverton Mill. Passing beneath Thorverton Bridge, a Grade II Listed Structure built in 1908, the river continues its journey on towards Nether Exe and Brampford Speake.

Beyond Brampford Speake the meandering river passes beneath two rail bridges, North Bridge and Stafford Bridge, both of which carry the Great Western Railway across the river. The River Culm joins the river just below North Bridge. At Pynes, a weir diverts water to the water treatment works, originally constructed in 1835 to supply water to Exeter city. Almost immediately the river is met by the waters of the River Creedy, with the Creedy first flowing beneath the Grade II Listed Cowley Bridge built in 1814, whilst the Exe flows beneath Isambard Kingdom Brunel’s Cowley Bridge constructed c1840. 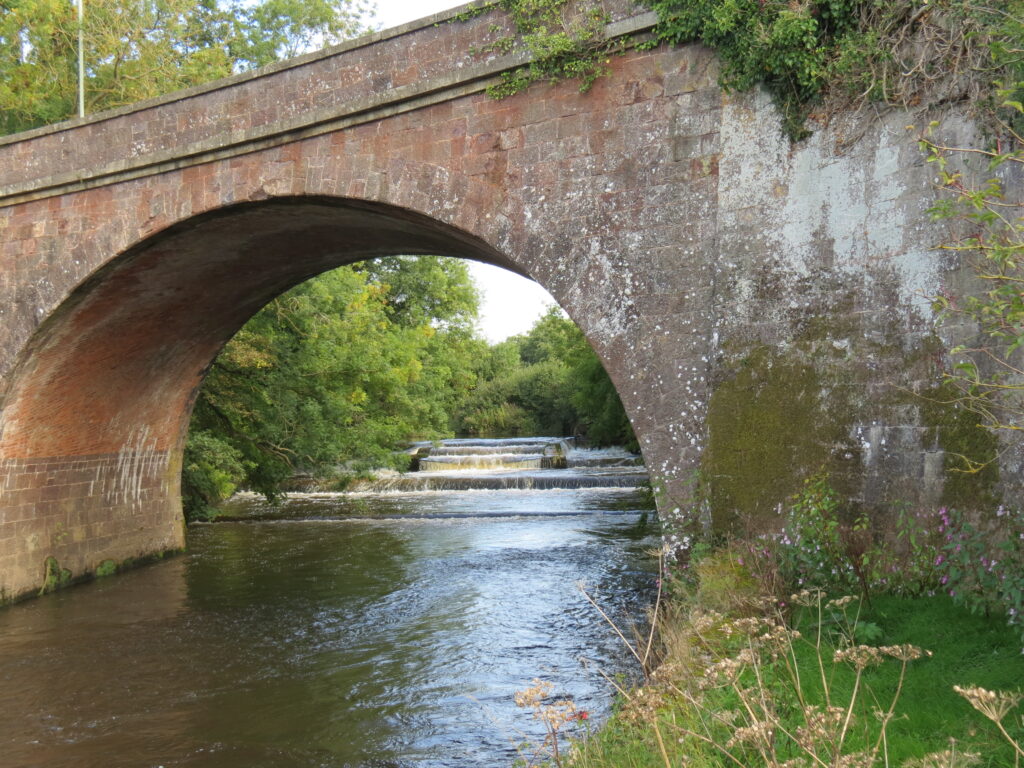 Approaching Exeter the river flows beneath Station Road Bridge which replaced an earlier bridge swept away in flooding during the building of the flood relief channel, the Exwick Spillway, the construction of which was completed in 1974. The spillway runs parallel to the river for a distance of approximately 1.6 kilometres ending at Millers Crossing. It then flows beneath a lattice girder railway bridge built in 1896 which carries the Great Western Railway across the river. 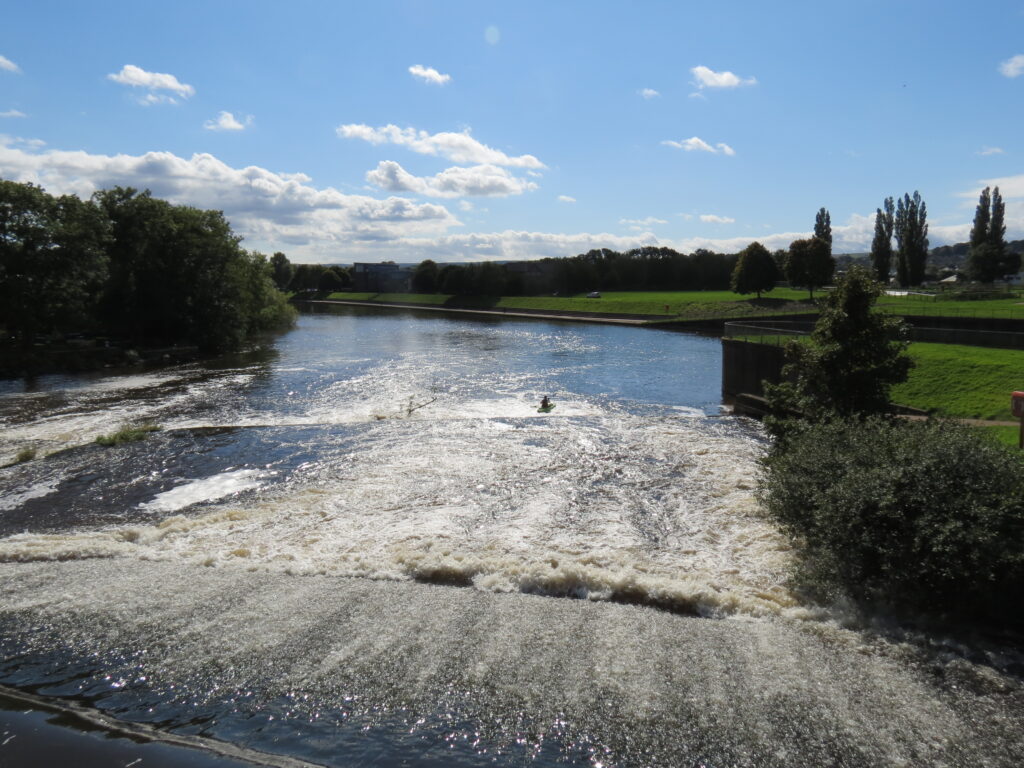 Next comes the 15th century Head Weir, built to supply water to Head Weir Mill which later became a paper mill and then the river passes beneath the footbridge at Millers Crossing constructed in 2002 above Blackaller Weir. After Millers Crossing the river reaches the two twin Exe Bridges completed in 1969 and 1972, and then flows beneath Cricklepit Bridge, a foot and cycle bridge constructed in 1988 to link the Quay and Haven Banks. A little further downstream the river passes the entrance of the Exeter Ship Canal, opened in 1566 was , the first such canal to be built in England. The water level of the river was raised to feed the canal by the construction of  Trews Weir. After the weir the river passes beneath Trews Weir Suspension Bridge reconstructed in 1993 from the earlier Match Factory Suspension Bridge built in 1935. 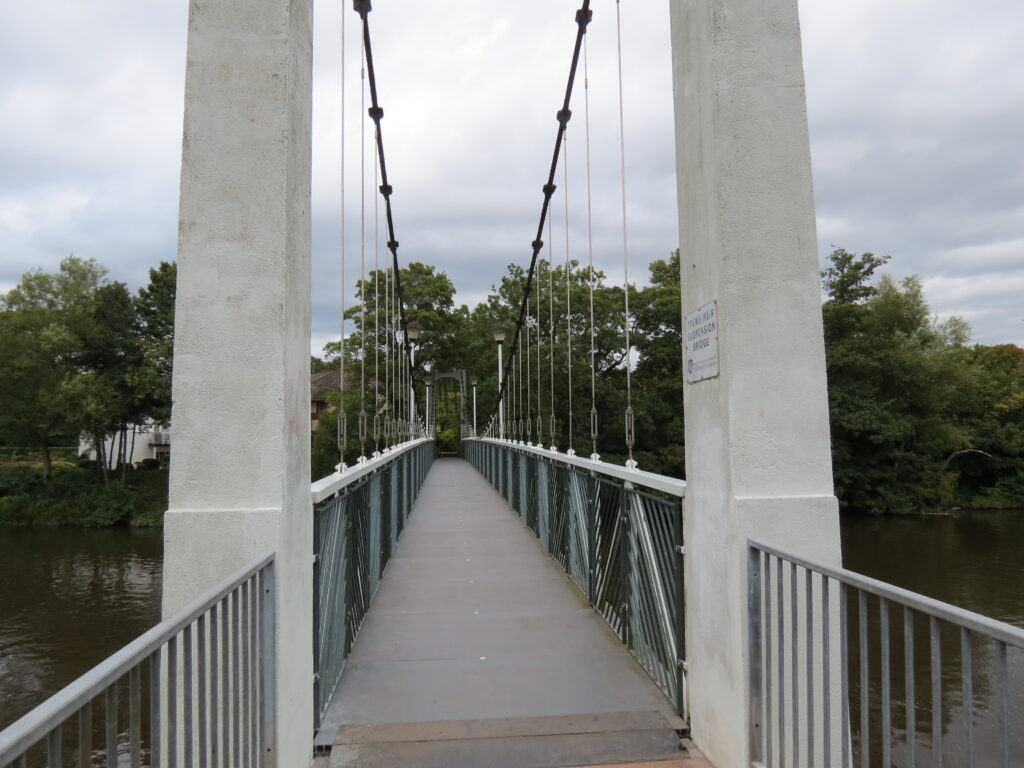 Just a further 900 metres downstream the river reaches another impressive weir – St James’ Weir constructed in the 14th century by the Courtenays to raise the river level for the St James’ Mill Leat that drove the Courtney mills in Countess Wear. After a further 2 kilometres comes the 6 arched Countess Weir Bridge built in 1770, it is a Grade II Listed Structure. Finally the river passes below the M5 bridge at Topsham where the River Clyst joins the flow in the Exe Estuary before reaching the open sea at Exmouth. From source to reaching the sea the river has travelled an approximate distance of 63 miles. 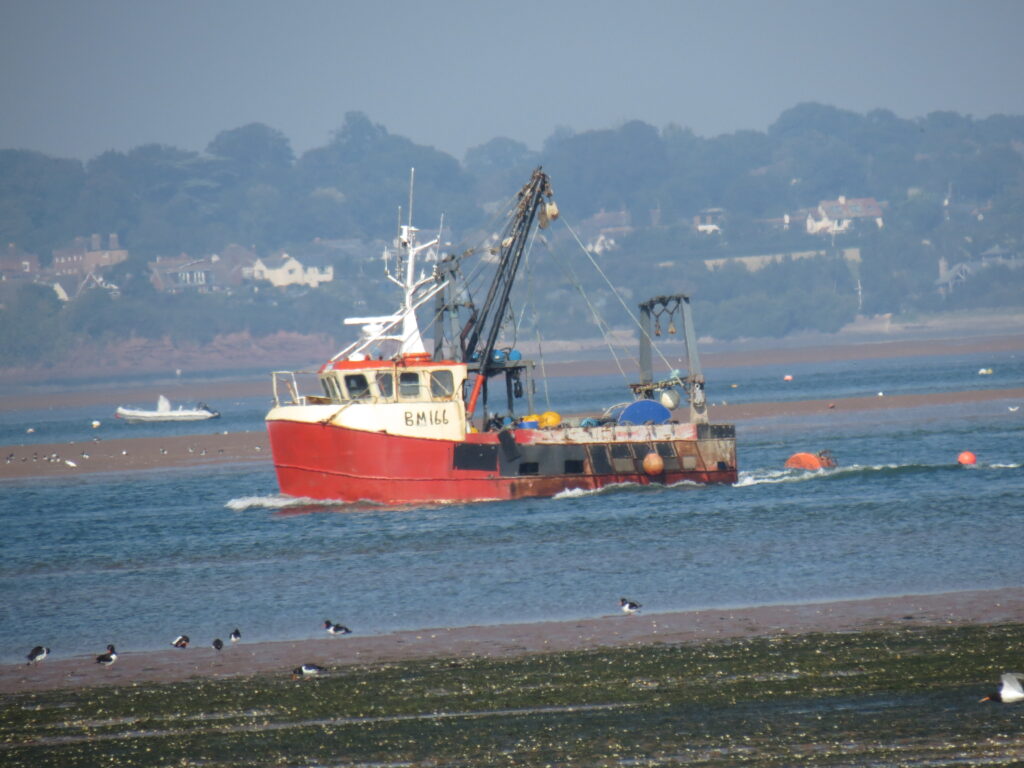